A Tribute to One of Our Founders 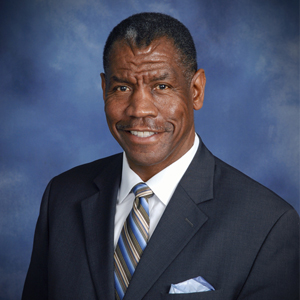 Reverend McCluster serves in his 24th year as the Senior Pastor of Shiloh Baptist Church in Bridgeport, Connecticut. He is the Founder of Faith Community Development Corporation, the faith-based Community development Corporation chartered by Shiloh Baptist Church. Pastor McCluster served as the Chairperson of the South End Neighborhood Revitalization Zone in Bridgeport, working on Development, Planning and Education issues in the South End Neighborhood and city of Bridgeport. He is also blessed to serve as the Advisory Board Chair for Faith Acts, the Faith-Based Educational Advocacy Organization Headquartered in Bridgeport, CT. Reverend McCluster is a Lecturer on Financial Affairs and Consultant for Housing & Development with the Connecticut State Missionary Baptist Convention.

Pastor McCluster has also served as the Economic Development Coordinator for the New England Missionary Baptist Convention (9 States throughout New England). He is a former Board Member of the Greater Bridgeport Chamber of Commerce and Neighborhood Housing Services of Bridgeport, as well as the United Way of Greater New Haven and H.O.M.E. Inc., a non-profit community housing development agency in the same city. Committed to Sustainability, Reverend McCluster led Shiloh to become the first African- American Church in Connecticut to become Energy Self-Sufficient through Solar.

A former U.S. Air Force Academy Cadet, Reverend McCluster holds a Bachelor of Arts Degree in Political Economy from the Colorado College and a Master of Divinity Degree from the Samuel DeWitt Proctor School of Theology at Virginia Union University. He has also studied at the Yale School of Organization & Management in pursuit of a MPPM Degree.

Co-directs the corporation and directs the administrative functions of the Corporation. In the Southwestern Connecticut area, Bill is known, not only for his corporate/institutional work, but also for his dedicated commitment to serving the community in which he lives.

Directs the business of this community development corporation focusing on training, developing, and supporting the businesses, organizations, and residents who benefit from our assistance

Bill managed approximately 800 personnel with annual budget exceeding $100 million for more than six years. This involved all areas related to the physical and overall well being of Stamford’s residents and visitors. Included under his purview were the Police Department, Stamford Fire and Rescue Departments, the Smith House Skilled Nursing Facility, the Department of Health and Social Services as well as Stamford Emergency Communications, Management and Medical Services and Homeland Security.

Bill’s prior job was Worldwide Manager of Market Opportunity for the IBM Corporation. He was responsible for the development of the appropriate corporate capabilities to provide all groups within IBM the information they need about the market place, enabling them to make timely and actionable decisions concerning the various factors of marketing strategies that yield success in terms of revenue, profit, and market share. Mr. Callion retired from the IBM team after 34 years of service. During those years he traveled and coordinated teams all over the world, and was credited with developing novel and particularly effective analyses of market threats and opportunities, strategies for transformation of sales coverage, as well as procedures and processes for product distribution improvement. His past IBM marketing and sales management experience included leading as many as 500 sales professionals in a large region to achieve their goals.

In addition to many post-graduate seminars, including advanced management at Kellogg School of Northwestern University and at the Kennedy School of Harvard University, Bill has a Bachelor of Science Degree in Marketing and an MBA Degree in Management and Finance.

In the Southwestern Connecticut area, Bill is known, not only for his corporate/institutional work, but also for his dedicated commitment to serving the community in which he lives. Over the years he has been an active and leading participant in community organizations. Bill’s involvements have included being the board chair for seven community groups to include the library system, the soup kitchen, and a workforce development organization. He has been the chair of the City’s Board of Finance and a committee chair on its charter revision commission.